Think back to your childhood. What animated character captured your imagination so strongly that it’s seared into your memory?

For me, there are three. And although very different, they are iconic, classic characters and voice actors that are lauded for their work.

Have you heard of June Foray? Mae Questel? Adriana Caselotti?

June, Mae and Adriana (wouldn’t it be funny if her name was April?) were from different paths and times, and each came to fame in animation voiceover. In my childhood, each of these ladies held a special place in my heart for the animated character they played. Only as I pursued my own voiceover career did I learn… that June is the voice actor behind Rocky and many other beloved characters… that Mae is the voice of Olive Oyl and Betty Boop… and that is Adriana the voice of Disney’s Snow White. As a child, I was simply enchanted and captured by their voices and the beloved characters they played. I now dare to veer into fan-girl territory as I share juicy details about these three actresses, their firsts and their careers. 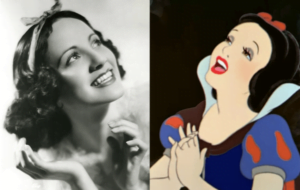 An official Disney Legend, she is the speaking and singing voice of Snow White, Disney’s main character in the worlds first feature-length animated film. Adriana was the voice Walt Disney knew was meant to be Snow White’s voice as well, when he heard her among the 150 or so auditioning for the role. I felt enchanted when I heard that song “I’m Wishing” as a little girl, and saw the way that Snow engaged animals.

Adriana’s father, mother and sister were performers. Her father was also a singing teacher in Hollywood, and Disney’s casting called him to ask for potential singer-actors for the Snow White role. Adriana jumped on the second line in the house to suggest herself! She auditioned for and received the role. Adriana was already a singer and performer when she took the Snow White role. And with it, she achieved many firsts: first Disney princess, first English heroine in an animated feature, first ‘named’ female voice actress, a voice on the first feature film soundtrack.

The irony? Being on contract with Disney created a single-lane career for Adriana. It is alleged that while under contract, she was limited to only do what Disney allowed. The Snow White film came out in 1937 and Adriana wasn’t even credited with the role at that time. Disney didn’t credit voice actors, pretending its animated characters were real. In fact, she was paid a small day rate for her work, and much later unsuccessfully sued Disney and RCA for a share of the soundtrack-record profits. This was back in the “studio era” of Hollywood when studios made all the big decisions. At the same time, she seemed enamored of the role, embracing the joy it brought to so many, re-sharing it over and over again in many ways. 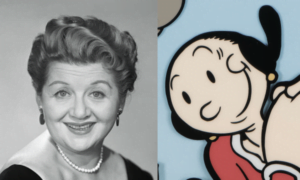 An impersonator, vaudevillian, actress and voice actress – Mae Questel made Betty Boop a media sensation and created the voice of Olive Oyl in more than 450 Popeye cartoons. Extremely famous for her performance as Betty Boop and sensations made while voicing her, Mae captured me with her vocals as Olive Oyl, Popeye the sailor’s girlfriend. I was captivated with Olive Oyl’s silly, unique, fragile, flippant, and sometimes defiant character.

Mae Questel was all personality and entertainer, even though she was discouraged from that career by her parents. Nevertheless, Mae began in vaudeville, became a star with her voice acting, and played occasional small roles in films and television later in her career. Her first big break was as an impressionist, doing all the famous stars of the time.

Max Fleisher found Mae through her comedic imitations. He hired her to be Betty Boop and then Olive Oyl. Mae collaborated with Max to create Olive’s voice: all crackly, squeaky and wobbly sounding, based on some characteristics of a 1930s actress. Olive Oyl was created originally in the newspaper comic strip Thimble Theatre by cartoonist Elize Segar. Popeye the Sailor became a long-running series of animated short films by the Fleisher brothers.

This is Mae’s first: First and longest-lasting voice actress star in animation history. She continued voicing Olive until the 1980s. 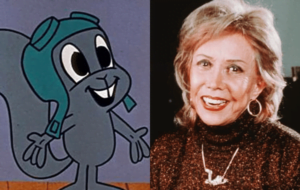 With her dexterous, pliable voice, June Foray worked in radio and then animation for film and TV her whole life. She captured my heart with her vocal portrayal of Rocky the flying squirrel in the “Rocky and Bullwinkle Show” produced by Jay Ward Productions. Since childhood, I have always loved squirrels, including Rocky. Rocky is a smart, flying squirrel that defeats evil with his best friend, a moose.

June Foray, at 12 years old, was on radio in a local drama broadcast. By 15 she was working in radio. Later she wrote and starred in her own radio series for kids, ‘Lady Make Believe’, which got the attention of animation producers. Her first prominent role was as Lucifer the Cat in Disney’s Cinderella in 1950. At Disney, she established one of her signature roles, Witch Hazel, in the 1952 short Trick or Treat. Chuck Jones of Warner Brothers (Looney Tunes, Merry Melodies) was impressed by June’s Witch Hazel characterization and invited her to work at Warner Brothers cartoons. There she played Granny, owner of Tweety Bird and Sylvester the cat, and Witch Hazel reprised with Mr. Jones directing.

Cute side story: Jay Ward Productions top brass Jay Ward and Bill Scott met with June at a lunch meeting while they drank martinis and pitched June on a new show idea. Apparently, June wasn’t sure about the show nor the martinis. But she gave in – on both! And that’s how Rocky found his voice. As well, during the Rocky and Friends program, there was the ‘Fractured Fairy Tales’ for which June portrayed many characters. In fact, June would go on to become the entire female cast for every Ward cartoon show from then on.

June actively wanted the world of animation to be celebrated. She came up with the idea of the Annie Awards through the ASIFA-Hollywood (the International Animated Film Society). In 1995 ASIFA-Hollywood created the June Foray award and she was the first recipient. It’s awarded to “individuals who have made a significant and benevolent or charitable impact on the art and industry of animation”. In 1996 and 1997 June won an Annie. In 2012, at 94, she got an Emmy, the oldest performer to be nominated and to win.